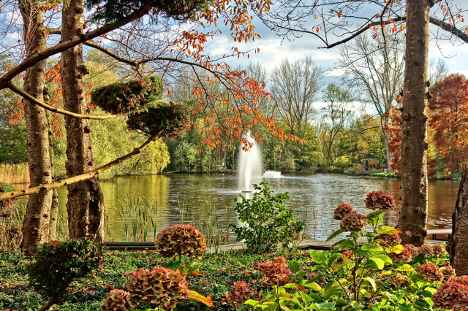 After a long day exploring and walking around the city, nothing is more comforting than getting a beautiful park to sit down and just chill. Have a moment to drink some water, wine, and look at the beautiful scenery around you. When it comes to city parks, Amsterdam doesn’t disappoint. It gives you more than relaxation as you can have picnics an even organize games. Here is a list of Amsterdam’s best.

It’s the most famous park as it’s located in the heart of the city. It’s close to almost all the major tourist sites. If you’re cycling, it will only take you 4 minutes from Moco Museum and 14 minutes on foot.  If the weather is great, you’ll find both locals and tourists taking advantage of it and lazying around the park. Also, Vondelpark Open Air Theatre has free shows and concerts from June to September so you can pop in for the entertainment. No need to worry about food as there are numerous cafes sprawled around the park.

You may find the park crowded close to the entrance as it’s very near the city center but it gets quiet as you go further into the park.

It’s like a small green oasis with a pond and a fountain. The park is very close to the Albert Cuyp market so shoppers can always pop in to relax and have a picnic of the delicacy they just bought. We recommend it for those who want seclusion as you’ll find a few people dog walking or playing some sport. And they have no food or drink facilities in the park.  Oh! They have a hidden viewpoint in the northeast corner of the park. You can’t leave without seeing it.

It’s one of the most culturally diverse and large parks in the city. You’ll find it in the eastern part of Amsterdam, take the tram lines 9,7, or 3. The park has such a vibrant atmosphere that you’ll find food stalls, children paddling areas, and ponds with singing birds. Plus it also gives you a taste of museum Amsterdam as it hosts the National Monument of the slavery history and De Schreew which is in memory of the famous Theo van Gogh murder.

It is also in the eastern part of Amsterdam and is part of the Frankendael estate. When talking about exquisite ecological creations in the city, you have to mention this park. The green nature trail is a hidden gem for visitors to discover. You’ll find an allotment garden with aquatic garden creatures, an amazing playground, and one of the most beautiful restaurants in Amsterdam – De Kas.